This article was written by Rabbi Jason Miller, and originally published by Huffington Post.

In what could have easily been mistaken for a scene from HBO’s Curb Your Enthusiasm, two brothers sit at a conference room table in Southfield bouncing ideas off each other for mobile applications that could improve Jewish life.

A small collection of iPhones and iPads sits on the table, as one brother remarks that it would be cool if they created an app that would replay the rabbi’s sermon just in case you dozed off in the middle. The other brother suggests they create an app that allows congregants to choose High Holiday seats by selecting the seats before the holiday and making a donation right from their cell phone. They share a brotherly laugh as they reflect on one brother’s seat-saving tradition in which he drapes tallits (prayer shawls) over the rows of seats for the entire family. 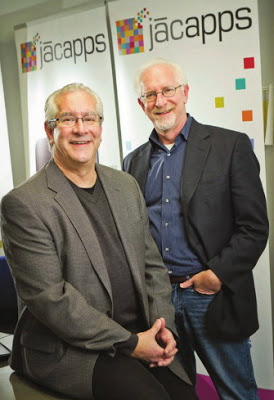 With one look these brothers seem to intuit that they’ve found a need for another app. This look is one that has no doubt been flashed from one brother to the other more than 500 times over the past few years. When there’s a need for something to be available on a mobile phone, Fred and Paul Jacobs will be there to come up with the way to do it.

The brothers launched jacAPPS (pronounced Jake-Apps; a riff on their last name) three years ago when they noticed a need for mobile applications in the radio industry. “Back in the fall of 2008 with the economy facing unprecedented challenges, few would have expected a company like ours to emerge as the leading app developer for radio,” company president Fred Jacobs, 60, of Bloomfield Hills explained.

The brothers’ entrée into the mobile apps market wasn’t by accident. Fred, the oldest of three brothers (Bill isn’t involved in the apps company), formed Jacobs Media in 1983 and went on to create the Classic Rock format while sitting at his kitchen table. Today, the company is the nation’s largest radio consulting firm specializing in rock formats. Each year, Jacobs Media uses Techsurveys to track the leading-edge technology trends in their industry, and in 2008 those surveys pointed the way to the smart phone revolution and the explosion of mobile apps. jacAPPS hasn’t stopped creating apps since and today it is one of the top developers in Michigan.

Having consulted rock and indie radio stations since the 1980s, the Jacobs brothers always try to figure out what radio listeners are doing and how they’re using technology. Their job is to help radio stations better understand the listeners. They knew that radio had lost much of its portability as people were choosing to listen to an iPod or MP3 player in place of a Sony Walkman or portable boom box. In recent years, when they realized that people were beginning to stream their favorite radio stations on mobile devices, they recognized that radio would once again be portable and they leapt into action. Rather than allow their clients to have their music streamed along with other radio stations’ music, they decided it was better to have single station apps. Apple’s AppStore had only been open for 90 days when they got to work on their first mobile app.

“Individual station brands deserved their own mobile apps,” wrote Fred Jacobs on the jacAPPS blog. “Surprisingly, some of radio’s biggest broadcasters took a different direction, building their own ‘umbrella apps’ that featured hundreds of their stations. You cannot underestimate the success of iHeartRadio or CBS’s Radio.com — apps that aggregate hundreds of radio stations under a big tent. Many smart phone owners swear by these apps, allowing them the ability to hear ‘favorite’ stations, while providing a diversity of choice. But our contention was that consumers are less focused on corporate brands than they are on hometown stations in their markets — or in cities where they once lived or visited. And for individual stations, the app experience has been powerful.”

After its incorporation, jacAPPS designed and released 20 apps in six months and began hiring young talent to grow the business. They continuously asked themselves what a mobile application can do that the radio station’s website cannot do.

They already had the listening ears of radio station executives across the country who were ready to implement whatever Fred and Paul Jacobs were recommending. When they told these radio stations that there existed a strategic need for customized mobile apps, the radio stations got in line and put in their orders.

The first app jacAPPS created was for WRIF, a Detroit-based Rock radio station. “They did a great job and allowed us to be one of the first radio companies to provide iPhone apps to our listeners and they helped us transform our business from strictly broadcast to a multi-platform media company,” said Tom Bender, senior vice president and general manager of Greater Media Interactive, owner of local stations WRIF, WCSX and WMGC.

“We are now in the development of version 3.0 of our station apps for both iPhone and Android phones,” Bender added. “We have brainstormed for additional new functions that would be of high user interest, and jacAPPS was invaluable in that process. It’s easy to get enthused by a shiny new piece of technology, but to have the research and user input to know how often and exactly how it’s going to be used make the difference. That, more than flashy graphics or slick colors, is the real creative input for me.”

The watershed moment for jacAPPS was when Christian Radio signed on. “We were recognized early on by iconic brands like K-Love and Air1, which opened up the Christian Broadcasting world to us,” explained company vice president and general manager Paul Jacobs, 57, of Farmington Hills. “Car Talk, C-SPAN radio, and other great non-commercial radio franchises have added to our portfolio.”

jacAPPS has been grateful for the many Christian radio stations that have ordered customized mobile apps, but they are especially proud of some of the Jewish-themed apps their company has created such as Jewish Rock Radio, launched by Jewish recording artist Rick Recht. “We launched Jewish Rock Radio with the goal of creating the first truly high-caliber, 24/7 international Jewish rock radio station — a critical communication channel for the Jewish world based on the business models, the aesthetics, and ‘best practices’ of the very best online radio stations offered in the Christian and secular worlds,” Recht, the executive director of Jewish Rock Radio explained. “When we dug deeper to find the developer behind some of the stations we wished to emulate, we found JacApps. With JacApps, we had found a developer who could not only create apps that were on caliber with some of our favorite Christian stations, but literally had created some of those apps!”

The Jacobs brothers believe strongly that radio stations were originally questioning if their music should be available on a stream, but they have taken it to the next level as their clients realize that they must have an app. They see themselves as improving the radio experience in the 21st century by helping radio stations create something that will generate revenue, enchant their audience and help them better distribute their content in the digital age.

While radio was their springboard into the mobile application industry, jacAPPS now designs and builds apps for a wide array of business categories and industries including festivals, events and sports brands. The Southfield-based company, which was spun off from Jacobs Media this summer, has created apps for the Spartan Sports Network, Ann Arbor Art Fairs, the Detroit International Jazz Festival and the Taste of Atlanta. The company is looking forward to creating apps for political candidates as the upcoming election approaches.

One difficulty for jacAPPS has been the lack of compatibility across platforms. They have had to create separate custom apps for their clients on Apple devices, as well as on the Android and Blackberry platforms.

Since its launch in 2008, jacAPPS has created more than 500 apps for hundreds of clients. And with more than 11 million downloads, they can likely claim the most amount of downloads for any app company in Michigan (Crains Detroit wrote, “The company is by far the leading app developer in metro Detroit.”). What has set them apart is their ability to build a company’s entire mobile strategy from the concept of the app to its design through development and marketing. In today’s portable world, Fred and Paul Jacobs have figured out how to elevate their clients’ brands and to successfully integrate that into the dynamic mobile space.

The jacAPPS team is made up of a handful of young, talented employees who are several decades the Jacobs brothers’ junior. They all seem to understand that mobile applications are the next step in the technology revolution. Bryan Steckler, operations manager, said, “We are now where we were with websites in the 90s. Big brands have mobile apps, and now every business is realizing they need an app.”

The two brothers enjoy working together in the same business. Pointing to his younger brother, Fred said, “If you can’t trust this guy, who could you trust?”

They are both quick to acknowledge that they would not be as close if they weren’t in business together. “It’s a family business and that leads to group collaboration,” Steckler said. “The fact that they’re brothers is what makes the company what it is. And that transfers to our clients as well.”

“We’ve been fortunate to build a team of smart, young talented people here in Southeast Michigan. Our apps are truly ‘exported from Detroit,’ and showcase the resurgence of the technology industry in an area more commonly recognized for its heavy industry,” Fred Jacobs remarked.

The future for jacAPPS is bright as the mobile app market continues to surge. “We see nothing but growth and expansion ahead. By blending strategy, research, and keeping a laser focus on the consumer experience, our expectation is that jacAPPS will become a leader in full-service mobile resource for brands of all types that recognize the mobile future,” said Fred.

The company has had its share of proud moments as it became one of the top mobile app developers. jacAPPS has had the top app in the App Store in New Zealand; its NPR Radio app was featured on the front page of the U.S. App Store; and its app for Pulse 88.7 in New York was featured on a billboard for Apple.

jacAPPS has developed a number of mobile apps for nonprofit companies at either no cost or discounted rates. The team has also taken pride in having the opportunity to work with interesting people. Among its clients is a Native American Council made up of several tribes. jacAPPS has created an educational application to teach the Native American language to children. As the development team demonstrates the app on an iPad, it is clear that they understand the role they have played in the continuity of these people’s heritage.

Paul Jacobs holds his iPhone and with a smile says, “We’re never more than six feet away from this device. This is the one device that’s always with you and the one that you’ll return home for in the morning if you forgot it. It is the hub of a person’s identity.”

The phrase “there’s an app for that” has become a popular punch line and much of the reason for that can be attributed to Fred and Paul Jacobs and their creativity.

Rabbi Jason Miller is the president of Access Computer Technology, a Detroit-based IT solutions and social media marketing company. He blogs at blog.RabbiJason.com