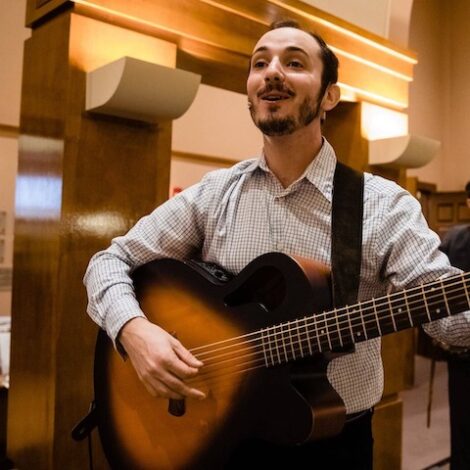 Jackson is an Ordination Candidate at the Rabbinical School of Hebrew College in Newton, MA with a Specialization in Spirituality and Social Justice and a Masters in Jewish Education with a concentration in Israel Education in conjunction with the iCenter. He grew up in the Reform Movement in California where he cultivated a love of Judaism, embolden with music, spirituality and justice. He served as Rosh Shira/Rosh Tefillah at URJ Camp Newman and Congregation Rodef Sholom for several years. Recently he was the Musical Director at Asiyah Jewish Community in Boston and is currently the “Head Shadchan” at Unorthodox Celebrations. Jackson was part of the inaugural cohort of The Nachshon Project’s undergraduate fellowship as well as the first cohort of Graduate School Fellows as well as being a Hartman Limmud Rabbinic Fellow. When not recording his own music, like his most recent album – “Notnim B’ahavah Reshut,” Jackson sings with the Chaverai Nevarech Band featured on Rabbi Josh Warshawsky’s albums. He is currently the Interim Spiritual Leader for Temple Beth Sholom in Framingham, MA and the Joseph S. Ingber Rabbinic Fellow at Romemu in New York City.

Jackson’s two newest adventures focus on the intersection of Jewish interpretation and the creative arts, seeking to bring intimate connections to Judaism across all backgrounds and denominations: intentional Judaica called Hiddur Mitzvah, partnering with Binah Designs to create innovative, tangible aspects of ritual, and an album of original Jewish music released in Spring 2020, focusing on reimagining texts of the Siddur and Jewish literature.