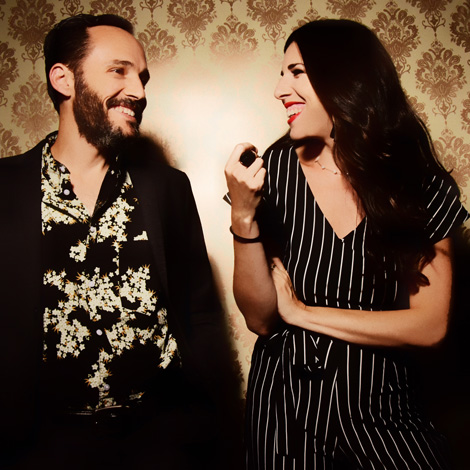 If our current political times have taught us anything, it’s that voices of the marginalized are finally being heard. Tempered with compassionate hearts and an interest in the controversial, Americana duo Joanie & Matt adapt ancient texts from the Hebrew Bible for a soulful and inspired new record. Sterling is seven tracks deep of provocative tales encompassing the #MeToo movement, the LGBTQ+ community and substance abuse; each chapter unfurling gritty honesty through a modern feminist lens.

On the back of a wildly successful Kickstarter campaign, the two acclaimed singer- songwriters — who share honors including an Emmy nomination, first place trophy in the USA Songwriting Competition and a finalist distinction in the John Lennon Songwriting Contest — reconfigure such stories as Adam & Eve in the Garden of Eden, Jonah and the Big Fish, and Tamar’s harrowing journey. “You’ve taken this body / Becoming a scoundrel / I could start a war,” mourns Joanie, underscoring the sheer brutality Tamar endures at the hands of close family in Samuel 2.

A Philadelphia native, Matt grew up on classic rock ‘n roll and jam bands, from early ‘90s Pearl Jam and Nirvana to The Rolling Stones and Bob Dylan. It wasn’t until his late teens that he heard bluegrass music for the first time, and to say it was life-changing is an understatement. He was transfixed by the gallop of flat picking guitar licks and banjo, vocal harmony work and the stories that seemed to dig deep into the various states of the human condition.

In his childhood, Matt attended a Hebrew school and went to a Jewish summer camp, experiences that would later serve him quite well in many of his musical projects. Struck with a love of bluegrass, leading him to set aside his guitar for a number of years, he picked up the banjo and played in numerous bands through college and his graduate studies in New York City. By his late 20s, he acted as a Hebrew School Principal by day and played music by night. Matt currently teaches music at Ramaz in NYC by day and performs in a bluegrass wedding band and with JAM at night.

As one of the top nationally touring children’s singer/songwriters, Miami-born Joanie Leeds learned how to play guitar when she became a SEFTY song-leader in the mid-90s. She brought her guitar with her to Syracuse University musical theater department and quickly realized writing her own music and being herself was much more enjoyable than auditioning for theater and pretending to be someone else. After graduating, she moved to NYC and bartended at the famous music club, The Bitter End. Joanie made her way through the club scene performing at CBGBs, The Living Room and Arlene’s Grocery while working at Miramax Films and Epic Records by day.

When she took a job singing for babies at Gymboree, Joanie was inspired to write music for children, Within a year, started her own birthday party business and became one of NYCs most in-demand party performers. Once releasing her first children’s album, Joanie shifted into performing at larger concerts for families and over the past decade has played music from her 8 albums nationally for thousands of families.

For her original children’s music, Joanie has won first place in the USA Songwriting Competition, Independent Music Award Winner, Gold Parents’ Choice Award, NAPPA Gold Award, is a John Lennon Songwriting Award Finalist and International Songwriting Competition Finalist. Her original music has been featured in People Magazine, USA Today, Parents Magazine, New York Times and Washington Post and played at venues such as Lollapalooza, Clearwater Festival, The Skirball Center, Wolftrap, The Kennedy Center and the Smithsonian. Joanie’s ninth children’s album, “All The Ladies”, will be released in March 2020 featuring the voices of women from across the country, including Lisa Loeb and Chava Mirel.

Together, Joanie & Matt have performed at Rockwood Music Hall 2 & 3, The Bitter End in NYC, World Cafe Live in Philly and Biennial 2019 as well as many Synagogues and JCCs.