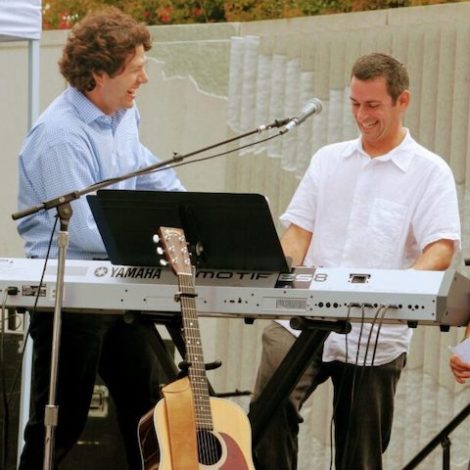 Mah Tovu was founded a long time ago, when rock was young, before music was digital…

Steve Brodsky and Yoshi Zweiback met while songleading at NFTY conventions. They started writing music together. In 1995, they released “Only This,” produced by Sam Glaser.

Soon, Ken Chasen joined the band. They wrote some more songs, performed at CAJE conferences, and released another album in 2000, “Turn It,” produced by Gordon Lustig. In 2002, they released their hit single, “Pharaoh, Pharaoh.” They published a few books with the folks at Behrman House. Steve left the band to form “Sababa” (but they are all still friends and Steve even sings on two songs on Mah Tovu’s new album).

Their latest album, “These Are the Things,” only took 14 years to produce. They are grateful to Kenli Mattus for his immense talent and considerable patience.

When Ken is not writing and performing with Mah Tovu, he serves as Senior Rabbi of Leo Baeck Temple in Los Angeles.

When Yoshi is not writing and performing with Mah Tovu, he serves as Senior Rabbi of Stephen Wise Temple in Los Angeles.