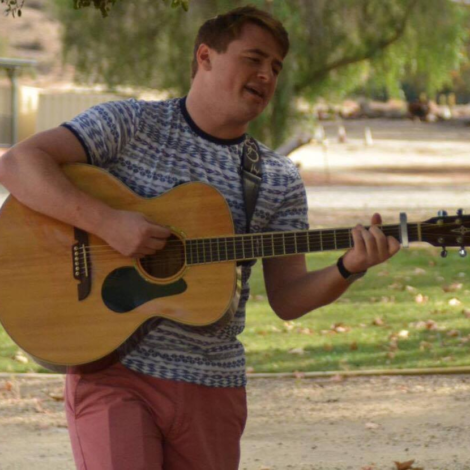 A student of music and Torah, Noah Diamondstein seeks to elevate souls through Jewish music that is emotionally resonant and a sustenance for the heart and mind, as music like this has always been for him. Noah is an artist, songleader and rabbinical student one year away from ordination who lives in Los Angeles, California where he attends Hebrew Union College.

Noah is a multi-instrumentalist who plays almost every instrument on his records, from guitar, to bass, to drums, to banjo, to mandolin to vocals and more! His music crosses genres from folk to pop to hard rock, and his textual influences span liturgy, TaNaKh, and rabbinic texts. His lyrics address prayer, mental health, Israel, bettering the world, and what it really means to be strong. He dreams of creating intentional prayer practice with communities he gets to serve and with whom he gets to sing, and is constantly searching for new ways to inspire people to think and feel deeply about life and how Jewish tradition, stories and thought can imbue it with meaning.

Noah worked as the head songleader at URJ Camp Harlam for two non-consecutive summers, and his work at the camp helped grow the songleading culture immensely. His last Shabbat Shira at camp was song-led by 20 different staff and older campers who understood the power of helping a community like Camp Harlam to sing beautifully. Since that time, he has led music in Israel and in Southern California as he has progressed in his rabbinical studies, and will soon be visiting .other communities across the country

Noah’s first album, Ashira L’Adonai, was recorded in October of 2018 and produced and engineered by Jewish touring artists Dan Nichols and grammy-nominated sound engineer and drummer Mark Niemec. He visits communities from time to time to lead services, perform concerts, and teach.