In 2007, I jumped off a cliff. I had an amazing job as VP of Programs at the Foundation for Jewish Camp, an organization I had helped to grow since basically the beginning. I had incredible opportunities to create national leadership training programs from scratch, including the Cornerstone Fellowship (now well over a decade old). I loved performing with my band, Less Nessman, all around New York City.

But something struck me, as I toured camps each summer, and looked at the landscape of those Jewish rock bands performing and inspiring campers and youth around the country. Something was missing – or rather, some ones. GIRLS.

Sure, there were ample female songleaders (and even a few songwriters) – but the general picture of Jewish rock bands role-modeling up in front of kids and teens was overwhelmingly male.

I couldn’t sit still with this observation. Why was this the case? Why weren’t girls entering into this space? Was there a subliminal message that they weren’t invited? There’s this understanding in the corporate world that if a girl doesn’t see other women in a particular career, then she doesn’t even consider that a career option. Was this the case? If so, we’d better get some women rockers up in front of these kids and fast!

So, I took a risk, jumped off the cliff and spent a couple of years building up my own music project – the Naomi Less Band – while wrestling daily, wondering, “did I make the right choice?” I kept in mind the age-old concept from Ethics of the Ancestors (Pirkei Avot),“it’s not upon you to finish the task, but you can’t run from it either.” I walked my talk and tried to show young girls that Jewish chicks can rock. Girls need to witness that full participation in this Jewish cultural music arena is an available and clear option.

Jewish Chicks Rock was born. I began to offer workshops to create open and honest values conversation with girls. I talk with them about what it takes to create gender-balance in any field. We write and record music together. And yes, we pick up instruments and form bands – I give girls the direct invitation to step into a place that they may feel intimidated to enter. Sometimes they may feel that a particular instrument is not “meant for girls.” We blow that concept right out of the water. Girls can play bass, drums, electric guitar – they can turn typically “girl appropriate” instruments (violin, keyboards, flute) into rock instruments and find their place in a band. They can use their voices loud and proud. And they can do this together – we’re stronger together. Educationally, I’m aiming for greater awareness that self-esteem and resiliency skills are crucial to holistic Jewish education as well as a gender-balancing the field of Jewish music. But what the girls experience is FUN.

I’m most proud of the past 6 years where I’ve been working with an incredible partner, Camp Louise, to promote a philosophy: Jewish girls can rock, in attitude, self-presentation, and talent. We work in an intensive six-day space for collaborative Jewish learning, where girls are encouraged to place their voices and opinions in the center, to take (safe) risks and to support each other in musical experimentation. We see girls develop musically over the course of the six days, but they also grow in Jewish values-based life-skills. They learn through intensive community to express themselves and their Jewish identity through music while chiseling away at the gender-balance issue we have in the next-gen cultural and liturgical musical developers.

Jewish Chicks rock is built on the shoulders of secular programs like “school of rock” and the Girls Rock Camp movement but with Jewish values/context and content. Like the girls rock camp movement, girls “rock” when they make a “mistake” and are celebrated for taking risks and not being “perfect.” I witness girls growing their leadership skills, gaining resiliency and self-empowerment skills and learning creative individual and group process while participating in Jewish music life.

I’m pleased to say, I’ve seen a shift, as more Jewish female artists and bands and projects popping up in the states and Israel. In my work with Jewish Chicks Rock, the Camp Louise program alone grew from 16 to 28 girls participating in four bands. About half of those girls have never picked up an instrument before Jewish Chicks Rock. Imagine what this Jewish music world could look like with Jewish chicks rocking across the country. 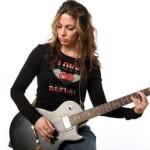 NAOMI LESS is a Brooklyn-based, internationally celebrated singer/songwriter, ritual worship musician and experiential educator. She tours extensively with her half-Israeli, half-American music ensemble, performing rock shows, acoustic concerts, and soulful worship events around the globe. Her two solo albums reflect a diversity of style and content – ranging from vulnerable liturgical ballads to high-octane, celebratory rock. Naomi founded Jewish Chicks Rock and Jewish Kids Rock band programs. Currently Naomi serves as the associate director of Storahtelling Lab/Shul, an experimental, everybody friendly, artist-driven community for sacred Jewish gatherings in New York City, reaching the world. She is a proud Storahtelling founding company member and Storahtelling Maven trainer. Naomi has a Masters in Jewish Education from JTS Davidson school and professional certificates from the Institute for Informal Jewish Education at Brandeis University Fellowship and Institute for Jewish Spirituality. She is a Center for Leadership Initiatives trained facilitator. Email her at [email protected]

Got kids or grandkids?? Here's a little "Tu Tu Tu

Rediscover and redefine Tu BiShvat music on a bran

So many of us for the past two years have been “

“Ana El Na” is a plea for healing of body and

It's a special Chanukah edition of Emerging Artist

Rediscover and redefine Chanukah music on a brand

Double YOUR impact! Partner with JRR and @JKidsRad