JRR Featured Artist, Saul Kaye, has published a new book! We asked Saul to tell us about his book what it has to do with his life as a Jewish musician. You can find his book on Amazon – be sure to check it out here!

I’ve messed up many times in my life – so many times, I won’t go into all the details. In my book Go! I talk about some of my many failures, some successes, and give you very short take-aways that can help you in your own life. I talk about running marathons, starting my first band, creating Jewish Blues, some really hard things that happened to me, what I learned, and how it all helped me become the person that I am today.

To quote Bruce Lee, “Every master was once a disaster.”

We all have a fear of failing that has been drilled into us: always follow the rules, play within the lines, please people and you will be accepted. Well, I have a news flash for you. Take a look around the room you are in right now – go ahead, look up from the screen or your phone. Look around at the walls, the chairs, the windows, the lights, the art. Everything you see has thousands of failures behind it. What do I mean? Look at the lights – Thomas Edison failed 10,000 times before creating the vacuum-sealed bulb that changed the world. The average millionaire has been financially bankrupt many times.

The reason I’m so excited about failure is because it means you are trying, you are stretching yourself, you are pushing past your beliefs and your current limitations. You have greatness within you! You have to mess up many times to get there, though. Have you ever met a child with two functioning legs that can’t walk? Neither have I. Why do all able-bodied children learn to walk? It is because they keep going until they learn. They fall thousands of times! Think about this: the average baseball player strikes out 80% of the time. They are paid millions of dollars a year to fail most of the time!

Think of a dream you have right now. Perhaps you want to become a rabbi, educator, songleader, touring music artist, scientist, adventurer, entrepreneur, create a life changing app or company that will revolutionize and disrupt the next industry. Think of it, imagine its completion, imagine how you will FEEL on the other side of that and sit in that feeling for 17 seconds. If you can hold that feeling for just 17 seconds, you can do it. This may be harder than you think and your mind will try to trick you out of it, but just focus, 17 seconds, then add another 17 seconds, imagine it in details, colors, feeling, smell, taste, sight, numbers, bright colors, make it brighter, and hold that vision in your head and your heart and you will get there.

Here’s one BIG mistake that I made in my Jewish music career. Craig Taubman invited me to be featured in Friday night live, the BIG shabbat event that he and Rabbi David Wolpe led for 14 years at Temple Sinai in Los Angeles. 1,500 – 2,000 people regularly attended, an 8-12 piece band played, and it was a BIG DEAL for me. Suffice it to say, I was a bit nervous. I had just released Jewish Blues Vol. III which included my version of Adon Olam. Craig liked this tune and wanted to close the night with that song! It was so new that I hadn’t memorized the words yet! I was freaking out, there was no music stand, and Craig runs up to me and yells, “Let’s do your Adon Olam NOW!” When I admitted that I didn’t have the words memorized, Craig looked at me with …. well, let’s just say there’s a concept called stink eye in the music biz, and Craig has a classic one. Craig held up the siddur (prayer book) for me while I played and sang the whole song. The 1,500 people in attendance stood up, clapping! It was epic and completely humbling. The lesson? Learn your words! The other lesson? Not one person mentioned anything about reading the ‘lyrics’ from the Siddur, they just said that they loved the tune.

Our fears of failing or making mistakes are ALWAYS greater than the potential reaction or outcome. My wish for you is that my book Go! will inspire you to greatness. You are here for a reason and the three most important days of your life are: the day you were born, the day you find out why, and most importantly the day you do something about it. 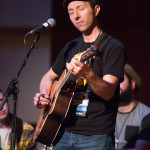 It is a rare and beautiful occurrence when an artist manages to interweave his personal life, spiritual path, and art. After releasing 5 CDs of varying styles from the late 90s through 2008, Saul Kaye was pulled towards an idea that he claimed wouldn’t leave him alone. This was the natural marriage of Jewish history, characters, and liturgy with the Blues. This Lead to the release of Jewish Blues Volume One- Live! Check out his website at www.saulkaye.com